I Finally Got That Coveted Slot on Radio Free Mormon 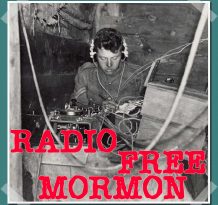 Well, it finally happened. Due to the overwhelming demands of one listener, Radio Free Mormon loosened its standards Friday morning and agreed to feature me on the podcast. |

Join us as I repeatedly wander off-topic into such areas as: why Connie no longer allows me to choose which movies we'll watch together, why my father was worried I might be gay, and why Superman should never have given that emergency signal watch to Jimmy Olsen.

Unless you think Orson Pratt composed his pamphlet version of the First Vision out of whole cloth, iit is probably more likely that he heard one of several verbal recitations that Joseph Smith gave of his vision and wrote it up later based on memory. That would explain at least part of the similarity between the 1838 and 1842 versions.

Steven Harper's recent book on the First Vision is more of a hippocampus memory psychological explanation of the variation in accounts over time (I was not aware that as a historian he was qualified in psychology or neurology, especially when spiritual memories have not been involved in real-time medical or psychology experiments), but he does give some excellent historical information on each account, their provenance, and the contextual history surrounding them.

Fredrickson,
I did not mean to imply for a moment that Orson Pratt made the story up out of whole cloth. Even though most of the membership at large had never heard the story, it stands to reason that Joseph would have told his closest associates.

My feeling is that the style and wordage of Pratt's 1840 version closely resembled that of the 1838 Joseph Smith first person version. It doesn't really mean anything in the end; we can speculate, and though I'm inclined to the belief that Joseph had a hand in composing the 1838 version, it's also possible he farmed it out to a ghostwriter at the paper.

In the end, it's a controversy that I no longer care to get into. All I need to know about the first vision account is that Joseph approached the Lord desiring to be forgiven of his sins -and not to find out which church he should join- and that his sins were forgiven. That's what we learn from his handwritten version. Everything else, especially the part in the 1838 account where he wants to know which church he should join, has been co-opted by the modern LDS church as a way to inform potential converts that their way of worshiping has been wrong, and that you can't really accept the Book of Mormon unless you join our particular denomination.

The Lord did not intend for the gospel to be proprietary to one single denomination.

Call me crazy, but that is what Boyd K Packer taught using different terminology. The phrase “fostering a belief” goes along with “an act of faith”. Along with “achieve success in anything” sounds like what you want or desire or how Boyd K Packer put it “things that you hope are true”. And lets not forget that “should be repeated” is being done when you “bear testimony”. It seems that Boyd K Packer is teaching New Age / Occult ideas.
https://seekingyhwh.com/2020/03/05/testimony-and-blessings/

I agree with Rock 100 percent on the First Vision. Even in the church's sanitized version you get Joseph contradicting himself with 2 pages about asking which religion to join, which I believe was a mistake the church made while adding to his original account. Too late to change it now, so they hope no one notices this gigantic logical error smack in the middle of the LDS version.

Rock, any luck finding or remembering where you read the John Gilbert Isaiah info?

Thanks for all your work my never met friend,

Adrian Larsen, a top leader/blogger in the Snufferites movement, has publicly stated it is not for him. One has to ask why he would say that? Does the Book of Mormon teach something different when translated into another language? No it does not. The Book of Mormon teaches the same precepts no matter what language it is in. And Joseph Smith taught we should abide [adhere to, maintain defend 1828 Webster’s Dictionary], just like how the scriptures teach we are to guard the Torah/YHWH’s instructions.
https://seekingyhwh.com/2020/06/01/james-scott-trimm-and-the-stick-of-joseph/

Well, I am not really here for long. Just to say that your blog, Rock, was instrumental in bringing me to Jesus. Thank you for writing it.

Yes, the 'First Vision' was fabricated out of whole cloth by Joseph.  In 1844, Lucy Mack Smith, produced a history of her life and the rise of the Mormon Church. Nowhere in her original account is there any mention whatsoever regarding a so-called "First Vision" (Lucy's Book: Critical Edition of Lucy Mack Smith's Family Memoir Hardcover) You would think that a visit from God & Jesus Christ to her son would be worth mentioning in her narrative.  This is why there are so many versions of the First Vision. A lie is hard to keep onpoint when you repeat it over and over. You forget what you said and add new information as time goes on.

DC is the best! Its DNA is so much more substantial with all the earlier comics companies it descends from. It really captures the zeitgeist of a younger and more vital America when anything was still possible for the bold. It is the America that was plowed under when thy bulldozed the MGM back lot. Do not accept the imitation!