The Book of Abraham Controversy Finally Laid To Rest 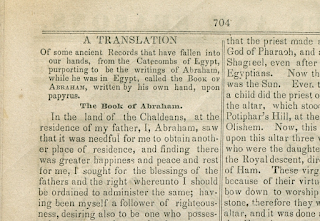 Previously: What a Great Time to Be Alive!

In recent years there have been a handful of (what purported to be) scholarly dissertations on the Book of Abraham that strongly suggested that document was a fraud.

According to that received narrative, given what is now known regarding Egyptology, Joseph's translation from the papyrus could not possibly have been accurate.  The conclusion is that the Book of Abraham was a fake; Joseph Smith most certainly made it all up in his head.

I believe I've read most of these arguments and even watched the documentary that has been floating around, and I must say those arguments have been compelling.  Yet when I would actually go back and read the Book of Abraham, the contents of that book rang true to me. Although the naysayers seemed -at least on the surface- to have an almost airtight case against Joseph's work, I remained skeptical of their conclusions. There must be something missing, I decided, some element of the story I wasn't aware of.  Turns out I was right.

Two weeks ago some 600 people pitched their tents at Aravada Springs, Nevada for a gathering put on by some of the local members of the loosely defined "Remnant" movement.  Denver Snuffer was invited to speak at this informal conference, and his topic centered around the provenance of the Book of Abraham. That talk lasted almost four hours, with a break halfway through for dinner.   Trust me when I say the evidence presented was eye-opening.

I'm not going to try to summarize Denver's presentation here; instead I'll simply post the video below.  If  you have ever had questions about the validity of the Book of Abraham, the answer to those questions is simple. But the explanation takes some time to lay out, so it's best if you sit back and allow Denver to the time to walk you through it.  Denver has also provided a complete transcript which contains copious footnotes and citations.  I'm posting a link to document below as well.

In point of fact, if there is anything fraudulent about the Book of Abraham, it's that the translation in the "authorized" set of scriptures Mormons have been given starts off with an introduction that was not written by Joseph Smith, but later added by Willard Richards under the direction of his cousin, Brigham Young, neither of whom knew what the hell they were talking about.  (I've included a scan of that introduction in the upper left-hand corner of this page.) Willard implies something about the translation not found anywhere in the text of the Book of Abraham itself, as you'll see when you read or listen to Denver's explication. That misleading introduction, which Mormons tend to accept as an integral part of the scripture, has been responsible for sending both anti-Mormon scholars and Mormon apologists off in the wrong direction every time. Watch the video and you'll see.

You can download the transcript (in Word format) by clicking HERE
Extra Bonus Material
If four hours on the Book of Abraham is not enough for you, also presented at that conference was a fascinating exposition by Vaughn Hughes titled The Electric Book of Abraham and Book of Mormon. That one lasts over two hours.  Although I have not yet watched Vaughn's presentation in full (I'm still going over Denver's footnotes), I am quite familiar with the subject matter, and I count Vaughn Hughes one of my closest friends and a brilliant teacher.  Find the time to watch this one. It will give you a whole new way of looking at the universe -a universe Abraham understood far better than most do today.

The Electric Book of Abraham and Book of Mormon.


In closing, don't forget to buy my T-shirts!

Just kidding. I don't sell T-shirts. But I do have another blog that's entirely different from this one. Check  it out sometime.
Posted by Alan Rock Waterman at 10:40 PM 35 comments: